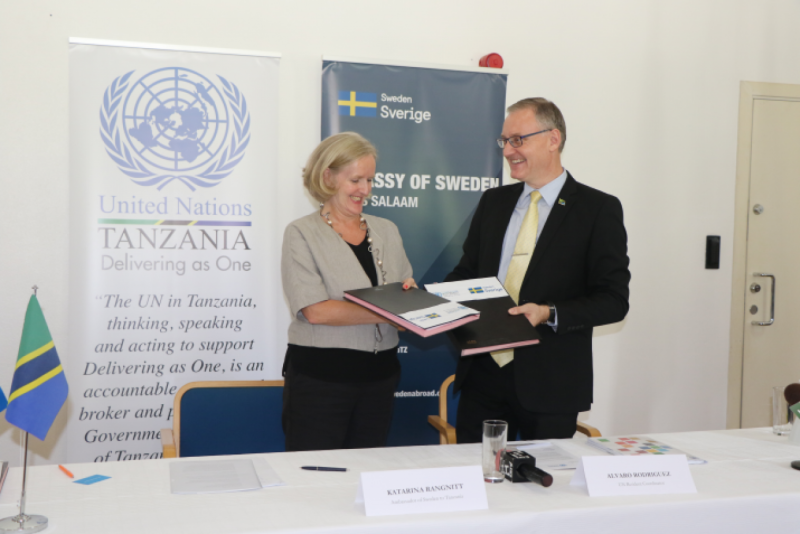 The Swedish Embassy in Tanzania has signed an agreement with the United Nations in Tanzania donating USD 36 million for development activities.

Dar es Salaam – The Swedish Embassy in Tanzania, has signed an agreement with the United Nations in Tanzania whereby Sweden donates USD 36 million (approximately Sh80.4 billion) for development activities over the next four years. The agreement was officially signed today by the Ambassador for Sweden to Tanzania, H.E. Katarina Rangnitt and the UN Resident Coordinator, Mr. Alvaro Rodriguez, at the Swedish Embassy in Dar es Salaam. Sweden’s contribution will support the UN’s efforts to promote inclusive economic growth and employment and strengthen democratic governance, human rights and gender equality. The contribution will also support increasing women’s political participation and combating violence against women and children.

Highlighting Sweden’s commitment to Tanzania’s social and economic development, Ambassador Rangnitt stated that Sweden has chosen to support UN activities that reflect the country’s development objectives in the areas of women’s rights, democratic governance and economic growth that benefits everyone as Tanzania aspires to become a middle-income economy.

“By channeling some of our support to Tanzania through the One UN Fund, we join forces to support Tanzania´s development goals. We also strongly recognize and value UN’s normative role for sustainable development. With this support, we enable actions in line with the Swedish feminist foreign policy as well as efforts for, among other things, decent employment and child rights, This demonstrates a continuation of Sweden’s close relations with both United Nations and the government of Tanzania for a more equal and inclusive development.” she said.

Reiterating their continued support to Tanzania and the UN, the Ambassador also took the opportunity to reaffirm Sweden’s commitment to the One UN reform and the recognition of coherent approaches and the added value that different UN agencies can bring to the table in collaboration with the Tanzanian government, social partners, and civil society.

Speaking after signing the agreement, the UN Resident Coordinator and UNDP Representative, Mr. Rodriguez thanked both the government and the people of Sweden for their sustained support noting that Sweden has been a steadfast development partner for One UN activities as well as for Tanzania.

“Sweden has been a strong partner of Tanzania and the United Nations for many decades. Focusing on the needs of the most vulnerable, these resources will make an important contribution to address the needs of those ‘furthest behind’ as called for in the Global Goals,” he said.“This contribution will help the UN be able to work across a broad range of issues such as promoting decent employment opportunities for poor Tanzanians, advancing good governance principles and women’s leadership in politics as well as preventing violence against women and children,” he added.