With more than 370 million people around the world belonging to indigenous communities and indigenous knowledge was (and remains) crucial for linking development, human rights, peace, security, and environmental sustainability. Stakeholders involved in the United Nations Indigenous Peoples’ Partnership (UNIPP) sought to leverage the voices of indigenous people in Bolivia, Cameroon, Central African Republic, Congo, Nepal, and Nicaragua in support of strategic initiatives at local and national levels.

The fund was the first global inter-agency initiative with a programmatic focus on indigenous people at the country level that was complemented by contextually-relevant interventions at regional and international levels.

The work of the United Nations Indigenous Peoples’ Partnership is possible thanks to the efforts of . These resources are pooled and channelled to participating organizations to promote joint action and multi-stakeholder partnerships, making a difference on the ground.

Deprived of being active participants in socioeconomic and political decision-making processes, indigenous people are often among the most marginalized in their societies. In 2010, 370 million indigenous people living in 70 countries around the world were the gatekeepers to highly specialized knowledge and strategies that are context-rich and have allowed for rapid adaptation and yet, millions faced discrimination, were unable to access education and health services, and also experienced compounded rights abuses or control over limited resources.

UNIPP was established to promote indigenous peoples’ rights worldwide through a UN system-wide process that would contribute to the Millennium Development Goals, national development aims, and put “One UN” to work for indigenous people. Joint programmes at the country level were the principal focus of the fund as partnership stakeholders aimed to make direct and lasting advancements in indigenous peoples’ rights. Country-level efforts were supplemented by thematic, regional, and global undertakings that strengthened advocacy, design, operationalization, and uptake of indigenous rights programmes through a tiered use of research, networking, and capacity-development.

The UNIPP was primarily comprised of joint country-level programmes where Participating UN Organizations collaborated on common goals. Two complementary lines of support were the capacity development to realize indigenous peoples’ rights as implemented through national joint programmes in one or more of thematic areas, and streamlining consultative mechanisms and participatory processes with national frameworks, with priority given to promoting and establishing participatory and consultative mechanisms in collaboration with indigenous peoples to foster inclusion of their rights into UN projects (including CCA/UNDAFs).

Some of the primary thematic, global, and regional support functions that were covered across programmes:

Also included were the building up of networks to exchange experiences, as well as training and capacity building at regional and global levels.

Since its launch in May 2011, UNIPP Partnership launched 110 activities in  Bolivia, Cameroon, Central African Republic, Republic of Congo, Nepal, and Nicaragua, as well as one regional project in South-East Asia. These projects raised the visibility of indigenous issues and increased government awareness to the point where many passed relevant policies and legislation that advocate for and/or secure the rights of indigenous people.

Projects were designed in consultation with indigenous people, local and national government officials, and representatives from civil society—forging effective strategic partnerships that were essential to ensuring adherence to international standards on indigenous people at the country level and medium to longer-term outcome sustainability.

“The UN Indigenous Peoples Partnership can be one of the key means, amongst others, to promote coherence and joint programming at the country level and therefore it is important to strengthen the partnership and its scope.”

Democratic Republic of the Congo: Supported legislative review and implementation of a landmark law on indigenous peoples, improved access to essential services for indigenous communities, and encouraged indigenous women to find their political voice.

Regionally, UNIPP supported a programme on legislative review and the promotion of national/regional dialogues on land rights and natural resources related to indigenous people.

Nepal: The fund built capacity on ILO C169 and UNDRIPP for peacebuilding, and promoted consultations for seeking to obtain free prior and informed consent as a mechanism for conflict resolution.

Bolivia: Promoted legislation on free, prior and informed consultations and built capacity for implementation and scaling up of interventions that enabled indigenous groups to participate in the formulation, implementation and evaluation of development plans. 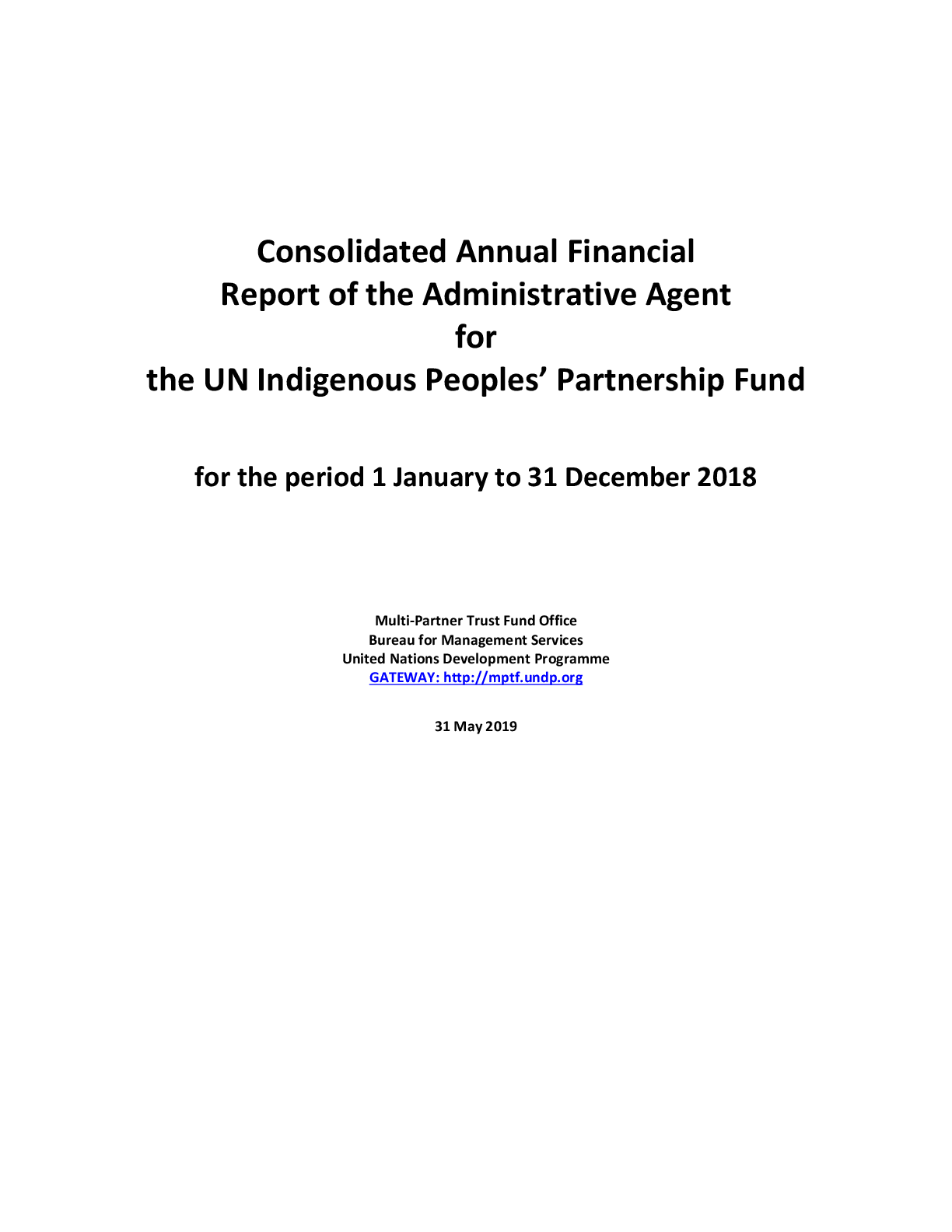 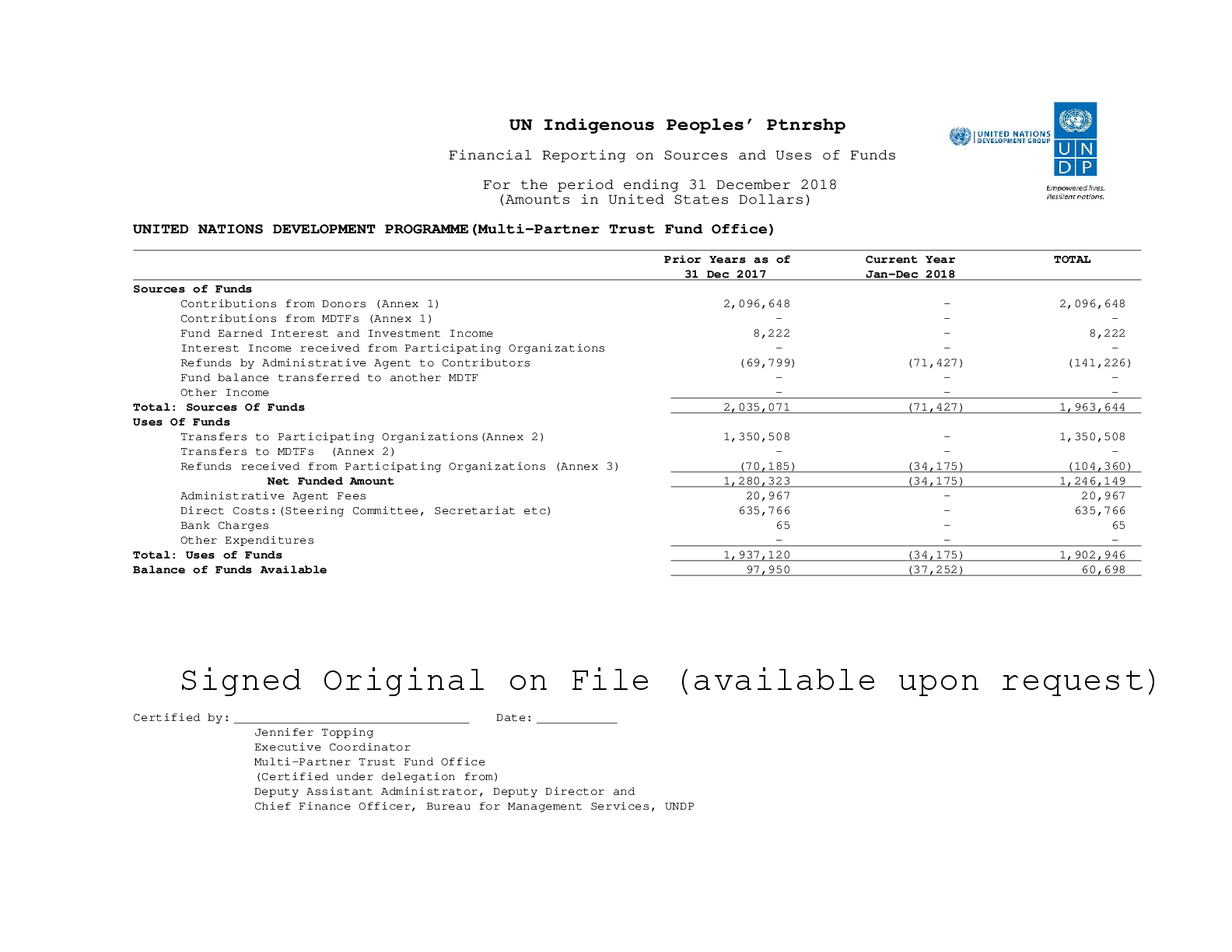 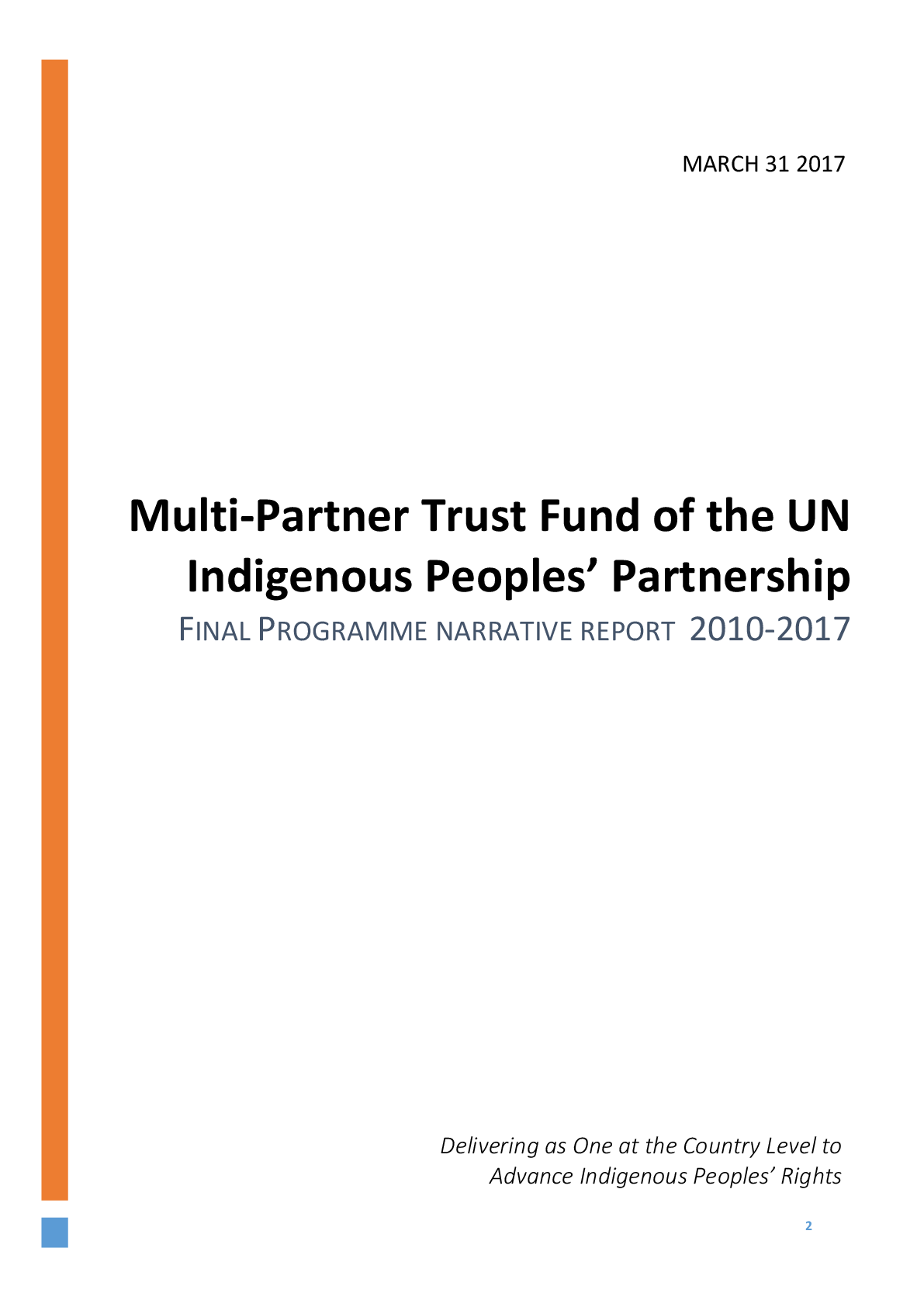 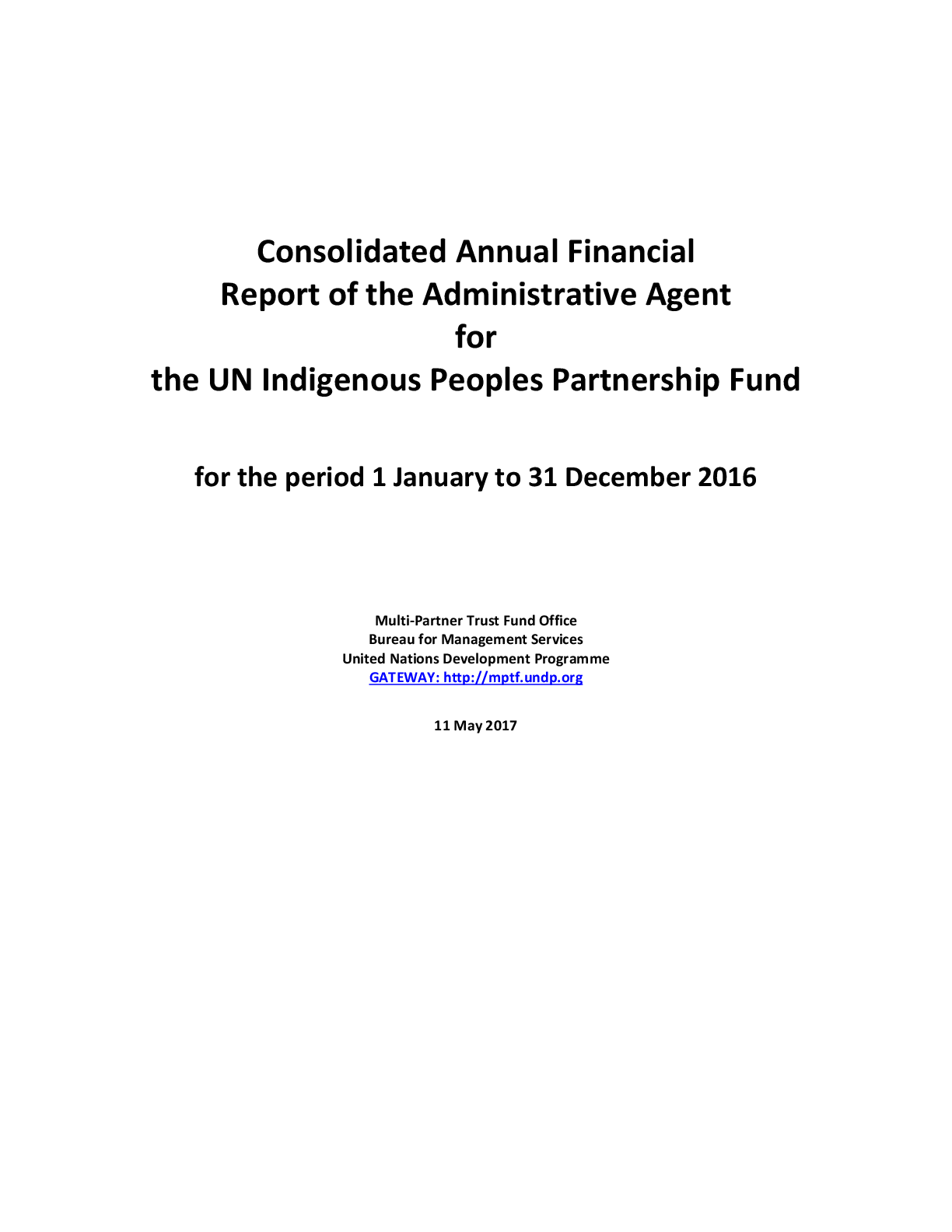 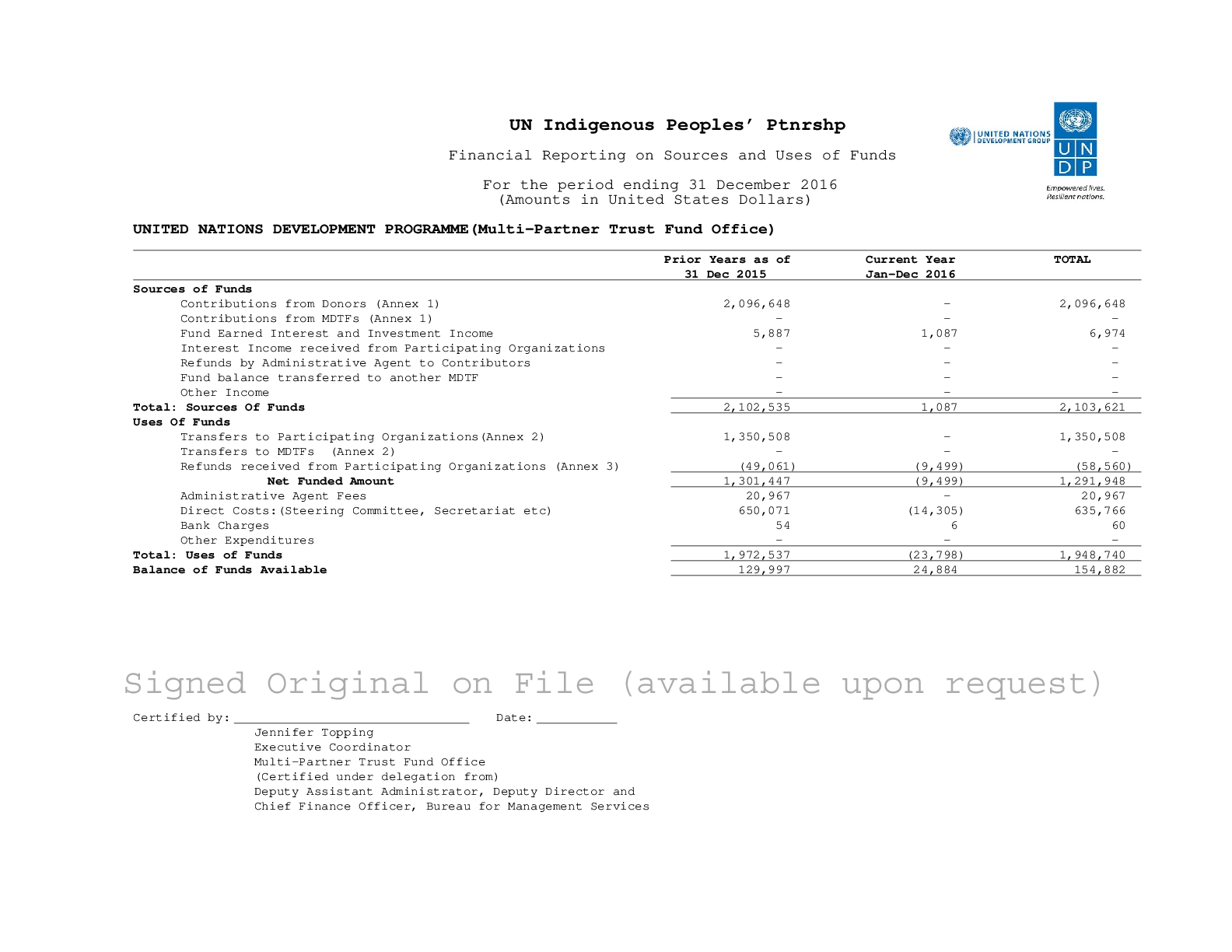 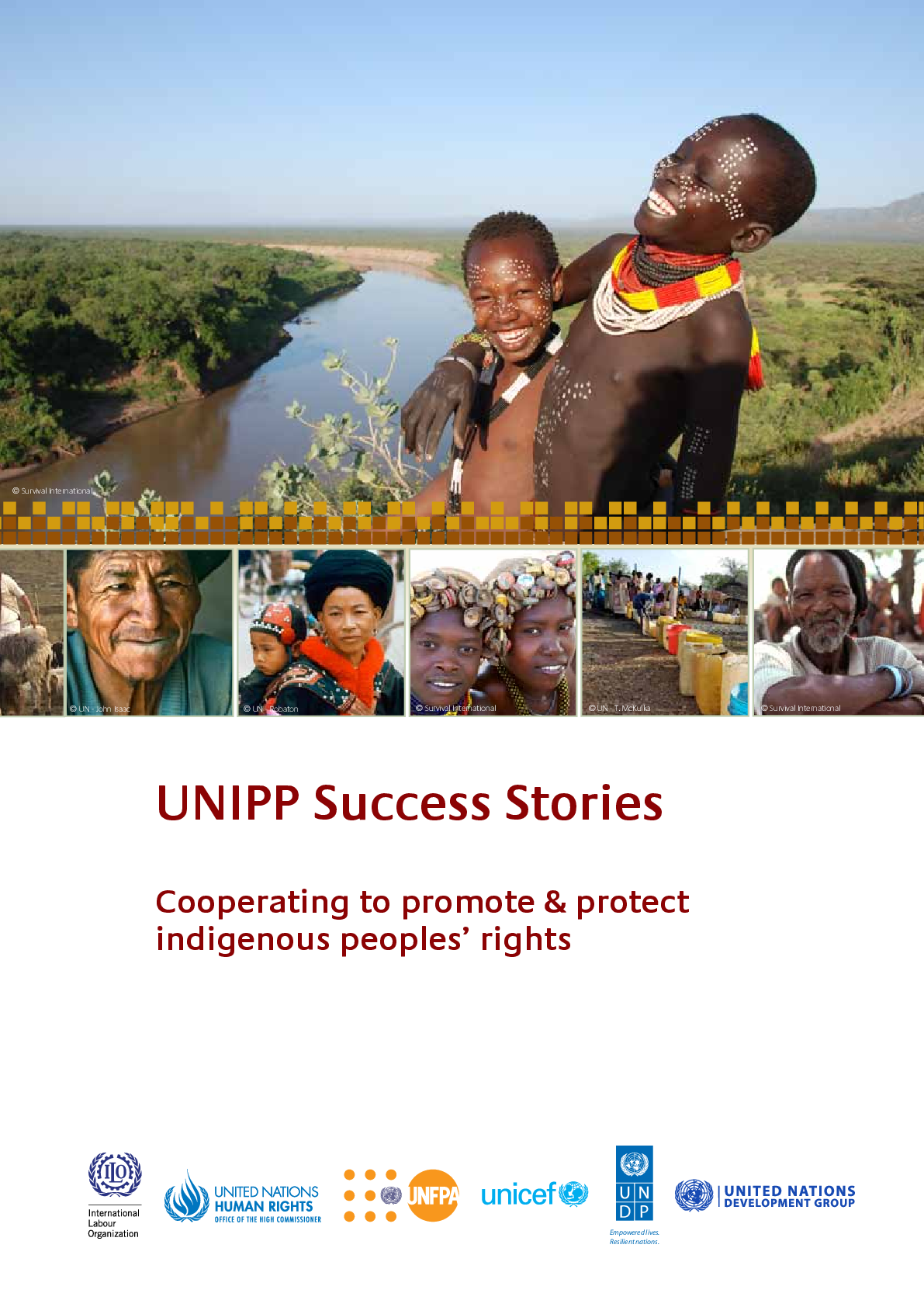