NewsA Child's Place is at School 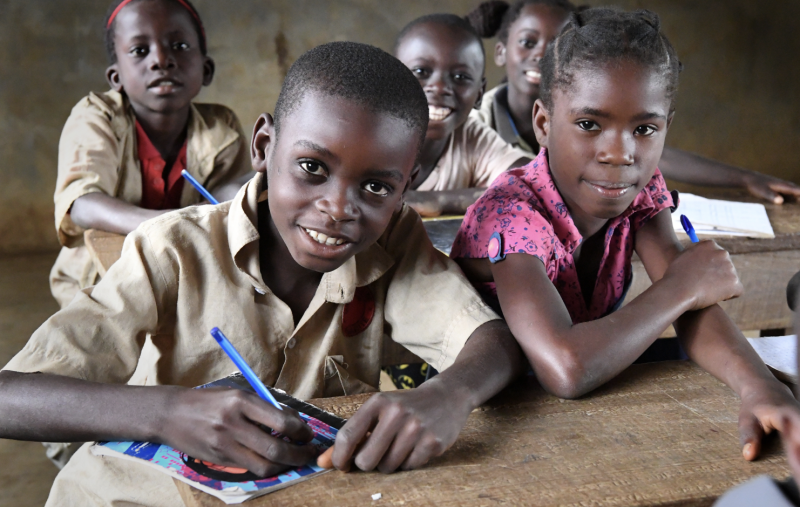 Life has not always been rosy for Trésor and Divin (fictitious names to protect identities), two young brothers aged 13 and 14 from a low-income family in Sibiti, the capital of the department of Lékoumou in western Congo.

Their case is not isolated: according to data from the 2014-2015 MICS survey, around two in five Congolese live below the poverty line. According to the 2016 UNICEF analysis of multidimensional child poverty in Congo, more than six in ten children, due to their dependence on adults, suffer from multiple deprivations. More than two in ten children in Congo between the ages of 5 and 17 are forced to work and 17% of them are victims of the worst forms of child labor.

Among the most marginalized groups in the country, indigenous children represent a fairly large portion of the Lékoumou population along with children living with a disability or with HIV, survivors of violence, orphans, children not registered at birth, children living in the streets, and children separated from their biological parents and forced to work (as in the case of Trésor and Divin).

"When [Trésor and Divin] were accused of theft, I immediately realized that they needed help,” said Mr. José Aimé, Commissioner of the Central Police Station of Sibiti, a member of the local Child Protection Committee. "I immediately alerted the Department Director of Social Business and Interim President of the Neighborhood Committee, because it is our mission and our responsibility to protect children in trouble."

This committee is part of a community mechanism for identifying and supporting vulnerable children. It has been set up with support from the Government of Congo, UNICEF, and other partners. Thanks to the Joint SDG Fund, a special multi-partner acceleration fund supported a 2020 training for 23 Social Affairs staff members, 18 social workers, and 78 community liaisons that covered children's rights and best social work practices.

“Trésor and Divin were entrusted to their aunt by their parents, as they did not have the economic means to take care of them. They spent their days selling food at the market and at times they were stealing to make money,” said Mr. Daniel, Interim President of the Neighborhood Committee. “It hurts your heart to see children forced to work when their place should be at school."

The case of Trésor and Divin is not an isolated case

"Unfortunately, here in Sibiti there are many children in the same situation as Trésor and Divin and many families need to gain awareness on the importance of creating a healthy and age-appropriate environment for children to grow up in safety,” added Mr. Gael, Head of the Family Office of the Department Directorate of Social Affairs." Poverty pushed some families here in Lékoumou to send children to work in the market. This is a harmful practice that should be banned for the well-being of children.”

Fortunately for Trésor and Divin, the intervention of their local Child Protection Committee has helped the boys hope for a better future.

“After educating Trésor and Divin’s parents and aunt, the two brothers went back to their parents’ home. With our support, they left their market jobs and enrolled in school and now regularly attend classes. All children, without distinction, have the right to protection and education,” continued Mr. Daniel, Interim President of the Neighborhood Committee.

“This child protection mechanism exists in the seven districts of Sibiti and should be extended to the 144 villages of Lékoumou, including the villages which have large indiegenous populations, concluded Mr. José Aimé, Commissioner of the Central Police Station of Sibiti." If we want to help children in Lékoumou, we need to require that community members receive specific training on how to handle and respond to child abuse and violence. "

A package of services for the protection of children

Institutional capacity-building is part of a Joint SDG Fund intervention package in partnership with the Government of the Congo, UNICEF and others, with the support of, to improve conditions of marginalized children in Lékoumou.

Through this initiative, more than 4,500 children were identified and registered in the civil registry and 1,600 received a birth certificate in 2020. In addition, 13 victims of violence were referred to maternity institutions and 14 others to the police.