NewsMothers of la candelaria, the resistence goes on 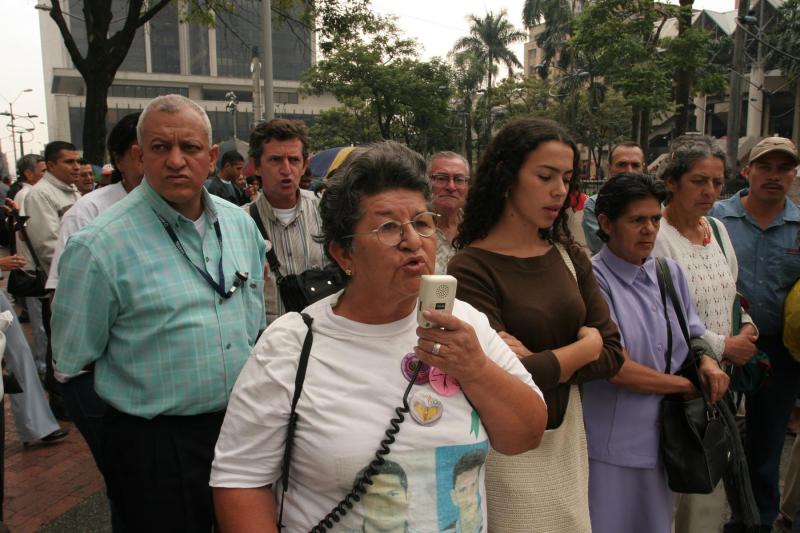 Cristian Camilo was 18 when he disappeared: “My son was a university student who was travelling to Bogotá by road with some classmates when they were detained in Doradal, Antioquia. That day my world was split in two, before and after that loss”, explains Teresita, with tears in her eyes.

Teresita Gaviria Urrego, president of the Caminos de Esperanza Madres de la Candelaria association, has been looking for her son for 22 years. However, her faith and commitment remain intact and she seeks to at least gain access to some kind of truth which will help heal her pain.

The ‘Caminos de Esperanza Madres de la Candelaria’ organisation was born on March 19, 1999, when various women got together in protest to show photos of their family members they had lost under different circumstances. The demonstration was exactly one year after Cristian Camilo Quiroz’s final destination was unknown, a victim of disappearance at the hands of the Autodefensas del Magdalena Medio group and son of Teresita Gaviria, who, at the time, was secretary and manager at the Atanasio Girardot stadium in Medellin.

Caminos de Esperanza Madres de la Candelaria handed over to the Special Jurisdiction for Peace the report entitled: ‘We want them alive, free, and in peace: resisting, searching and persisting until we find the truth’, which brings together 102 forced disappearance cases which took place between 1994 and 2011, and which was produced thanks to the technical support of the International Organisation for Migration (IOM) and the National Attorney General’s Office (PGN, for its Spanish acronym), as part of the “Guaranteeing of the capacities of the National Attorney General’s Office” project, backed by The Fund.

This project is born out of the objective of helping the Colombian state provide comprehensive reparations to the victims, with a differential, gender-based focus. The financed projects have made the victims protagonists, placing them at the centre of the process; not as recipients, but as agents in the search for truth, reparations and non-repetition.

That is why the projects implemented by The Fund, in coordination with the Comprehensive System for Truth, Justice, Reparation and Non-Repetition (hereinafter SIVJRNR) and particularly the Special Jurisdiction for Peace (JEP, for its Spanish acronym), are geared towards increasing access to justice for victims in the territories, through the strengthening of participation mechanisms in cases prioritised by the JEP, and also towards satisfying the rights of victims to truth, justice, reparation and non-repetition, through the strengthening of the capacities of the PGN for promoting and guaranteeing the participation of victims in the SIVJRNR.

Teresita, who is the leading voice of this organisation and a renowned activist in Colombia and the world, started with the “Mothers of Candelaria” platform in 1999, driven by the search for her son Camilo, using Argentina’s Madres de la Plaza de Mayo (Mothers of May Square) as a reference.

The “Mothers of La Candelaria” is an organization which is currently made up of more than 800 members in the Antioquia department, a territory which has the highest number of disappearances in Colombia, according to figures from the National Centre for Historic Memory’s (CNMH, for its Spanish acronym) Memory and Conflict Observatory.

For the last 20 years, every Friday at 2:00 in the afternoon, the members of the “Mothers of La Candelaria” organisation take part in a protest at the entrance to the La Candelaria church in the centre of Medellin, demanding the appearance of their loved ones; “we want them alive”, they repeat in their rally.

Finding their disappeared family members and helping all the women and men who have been victims of the violence is their main purpose. They demand that their children or family members be looked for.

“It seems like Cristian Camilo was swallowed up by the ground”, Teresita says, firmly, “but I will keep looking for him and all the people that the violence snatched from us, and keep searching for peace in our hearts and, in the worst case scenario, a place where we can visit their remains”.

“There isn’t a cheque big enough to drown the pain of the absence or disappearance of a child”, are the words of Teresita, who lays down her position with regards to the administrative reparations that have been taking place in our country.

Teresita left her job and has spent the latest part of her life, more than 20 years, seeking the truth that might heal her, she was one of the female victims who was part of the peace talks in Havana, where she was able to work out, alongside the various members of the old FARC guerrilla group, the location of some of the bodies of family members of those who make up the association she heads. Teresita still has no information on her son Camilo, but she continues with her faith intact, despite the years that have passed and the fact that she has been the victim of threats for her insatiable search. She continues to foster solidarity and hope in anyone that approaches her and the Mothers of La Candelaria, looking for support in the search for their missing family members, with more than a thousand cases being received by 2021.

“We want them alive, free and at peace: we will resist, search and persist until we find the truth”. Teresita and her son live in the memory of the resistance.