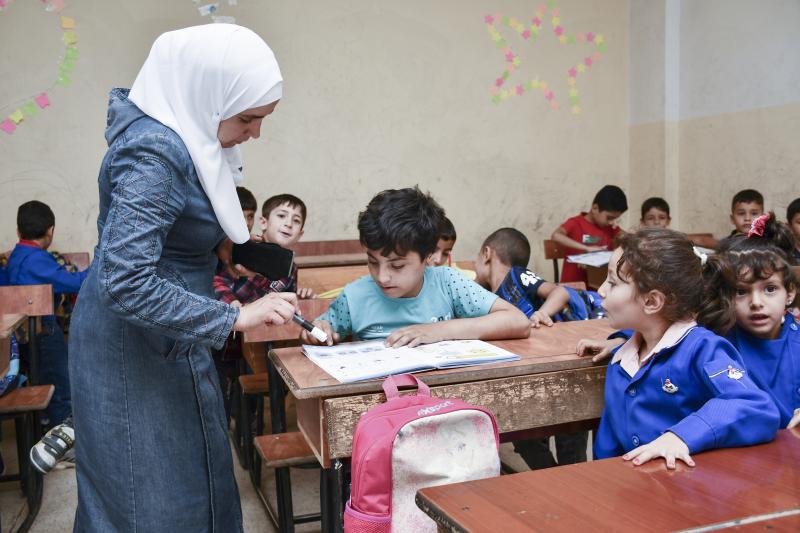 A UN joint approach to area-based and conflict-sensitive programming

Area-based resilience programming is an increasingly important tool in responding to complex and protracted crises such as the one in Syria. This type of programming offers an effective way to respond to humanitarian needs and to enhance social cohesion and trust building efforts, while also preserving and restoring community assets and resources. UN inter-agency pooled funds are particularly fit for supporting UN country teams working across the Humanitarian-Development-Peace Nexus.

The UN in Syria has been advocating for a significant increase in early recovery and resilience building assistance, with the European Union, Norway and Italy providing financing for one of its flagship programmes: the Joint Programme on Urban and Rural Resilience. The Joint Programme, using the inter-agency pooled fund modality, has been piloted since 2019 and has focused on Dara’a in southern Syria and Deir Ezzor in the northeast, severely affected by the conflict. The programme brings conflict-sensitive, area-based early recovery and resilience building programming to some of the most crisis-affected areas of the country.

The Joint Programme is a coordinated effort by six UN implementing agencies - FAO, UNDP, UNFPA, UN-Habitat, UNICEF, and WFP through an advantageous Joint Programming modality - to bring resilience and recovery-oriented interventions to communities in Syria who are still suffering from massive destruction of life and livelihoods. The UN Multi-Partner Trust Fund Office acts as independent and firewalled trustee of the fund.

The Joint Programme takes an area-based and conflict-sensitive approach to programming, with a focus on rural-urban linkages and gender-responsive/gender-transformative and inclusive planning. It is underpinned by a commitment to collective programming and community participation, as well as targeted efforts to include conflict-affected and traditionally marginalized groups all while encouraging cooperation and trust-building across social cleavages.

The programme engages women, children, and youth, as well as people living with disabilities and other vulnerable groups from different social groups to jointly agree on inclusive early recovery priorities. These priorities subsequently inform integrated, area-based interventions by the UN implementing agencies. Adopting such a human-rights based, whole-of-society approach, the Joint Programme puts local communities in the driver’s seat of early recovery and resilience building. It also targets three interdependent levels of resilience: individual, household, and community.

During the course of design, planning and implementation, certain barriers have been identified including, but not limited to, institutional silos, different systems that lead to fragmented accountabilities and lack of incentive structure, ‘business as usual’ mindset and projectized, or earmarked funding from donors among others. To overcome these challenges, several enablers have also been identified. For example, it is important to start relatively small, build momentum and confidence and expand further. Also, clear accountability and incentive structure needs to be put in place to foster coherent planning and joined-up programming which in turns enables a more effective and impactful outcome. This requires actors to own and buy-in the value-added and utility of such a process and moreover, actors need to be persuaded that the benefit of such inter-agency action outweighs the cost of it, recognizing that such coordination entails a transactional (perceived) cost. Coordinated and multi-year financing is also an important factor, because coordinated financing incentivizes and facilitates collaborative work on one hand, and multi-year financing on the other hand allows actors to shift towards more participatory, bottom-up, and area-based delivery of assistance.

Over the past few years, the experience of the JP in Syria has demonstrated the benefits of area-based, conflict-sensitive resilience programming. It has proven to be an effective and viable vehicle to deliver more sustainable results while also enhancing social cohesion at the community level through inclusive and participatory processes. This type of programming offers a triple nexus response to the Syria’s crisis, by effectively responding to the record-high growing humanitarian needs and reducing vulnerabilities while preventing new needs from emerging, preserving and restoring community assets and resources, and rebuilding social cohesion.

Financed through a multi-year, multi-donor and multi-agency pooled-fund financing mechanism, the Joint Programme in Syria has proven to be an enabling platform to enhance synergies, coherence and efficiency through joint analysis, coherent planning, and joined-up implementation. It is increasingly becoming an important tool in responding to protracted crises and such modalities should therefore be further explored and scaled-up.

Below are some examples of results and impact:

Having started as pilot intervention in Dara’a and Deir Ezzour in 2019, the Joint Programme has now matured to be one of principal programmes delivering early recovery and resilience building assistance across the UNCT in Syria, with the now tried and tested model that has proven to be a viable one of multisectoral support to tackle multifaceted urban and rural resilience challenges. Additional risk management and due diligence measures are in place, applying conflict sensitive programming that builds on robust conflict and human rights/protection risk analysis to ensure “Do No Harm” while empowering communities and building bridges across social groups, thereby seeking to advance a nexus approach. The programme provides an example of how pooled funds, accompanied by an advantageous Joint Programming modality, can further enhance UN’s joint action towards operationalizing the nexus into practice.