(New York) – Celebrities and business leaders joined governments and civil society members at the United Nations on Thursday night to mobilize support for the Women’s Peace & Humanitarian Fund (WPHF)—celebrating its mission to empower women working to build peace and respond to crises across the globe.

The WPHF commitment event and reception Accelerating the Women’s Movement for Peace & Humanitarian Action: Innovating & Challenging the Status Quo helped spotlight the concrete impact of current projects in Burundi and Colombia and launch its groundbreaking “40by20 for women” campaign—calling on business, government and philanthropy leaders to invest by year 2020 USD 40 million in women’s untapped potential to be a force for lasting peace.

“Wherever there is conflict and crisis, there are women with skills, knowledge and abilities to change their communities from the ground up,” said WPHF Global Advocate and actress Kristen Bell in her keynote speech. “But they need financial resources, support, and advocates who will amplify their voices and champion their cause.”

WPHF is the only global financing mechanism dedicated exclusively to supporting women’s participation in peacebuilding and humanitarian action. It shifts and channels urgent resources directly to women’s organizations on the ground, enhancing local women’s capacity to prevent conflict, respond to crises and seize key peacebuilding opportunities.

Since its launch in 2016, the fund has financed more than 41 projects working with 55 women’s organizations across Burundi, Colombia, Jordan, the Pacific region, and Iraq.

"Our unique model of rapid and strategic financing is strengthening women’s agency to be key players in conflict and crisis response,” said Ghita El Khyari, WPHF Head of Secretariat. “From supporting the economic empowerment of Syrian women refugees to engaging Colombian women in peace implementation, we are proving that financial investment in local women produces global dividends for transformative change.” 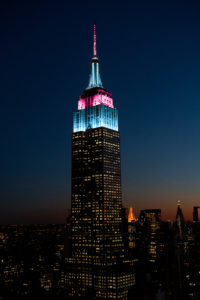 The WPHF event culminated in a ceremonial lighting of the world-famous Empire State Building in the fund’s signature colors as a special tribute to women working towards a more peaceful and gender-equal world, followed by a special performance by WPHF European Advocate and French recording artist Louane.

“Tonight, we are thrilled to see the iconic Empire State Building illuminate the sky in honor of inspiring women working on the frontlines of conflict to change the world,” said Louane. “Thank you for standing with WPHF as we call for concrete action to push this movement forward.”