Established with the support of peacekeeping and governance experts, the Elsie Initiative Fund takes important steps in encouraging and funding innovation to accelerate the pace of change in security institutions and enable more uniformed women to deploy to, and meaningfully participate in, peace operations.

The work of the Elsie Initiative Fund is possible thanks to the efforts of . These resources are pooled and channelled to participating organizations to promote joint action and multi-stakeholder partnerships, making a difference on the ground.

United Nations peace operations assist countries in navigating the challenging path from conflict to peace. While approaches have evolved over the past decades—to give a voice to women whose meaningful involvement has helped prevent and resolve conflicts, and rebuild in the aftermath—the number of deployed women peace and security personnel remains too low with only 14.5% of uniformed women police officers and 4.7% military personnel. Since 2015, the increase has been a meagre 0.8% (from 4.2% to 5%) in the number of women involved in United Nations peace operations. At this rate, it will take decades to reach targets outlined in United Nations Security Council resolution 2242. Based on the idea that financial means should not impede the advancement of gender equality, the United Nations and Government of Canada launched the Elsie Initiative Fund to support and incentivize an increase in the meaningful participation of uniformed women in United Nations peace operations.

The Elsie Initiative Fund, named after Canadian women’s rights pioneer Elsie MacGill (1905-1980), identifies and overcomes barriers to deploying trained uniformed women peacekeepers. Barriers include, but are not limited to, giving women the equal opportunity to deploy, reducing criteria that exclude women, providing women with the necessary working and living conditions to fully take part in peace operations, and experience equal treatment while on deployment.

Although not all barriers are addressed through financial resources, additional financing helps identify the most significant obstacles based on national context and gives stakeholders an opportunity to test innovations that address them. The Fund complements existing United Nations peace operations financing mechanisms and is the first instrument to focus specifically on the deployment of uniformed women in peace operations.

As per the Department of Peace Operation's Uniformed Gender Parity Strategy, the Elsie Initiative Fund accelerates progress towards achieving various United Nations targets by increasing the percentage of uniformed military and police-women serving in peace and security operations. Four outcomes laid out in the results framework relate to:

Primary recipients of the fund are troop- and police-contributing countries (T/PCCs). United Nations organizations that wish to implement and pilot innovative responses have secondary access. Monitoring, reporting, evaluation and context-specific risk mitigation strategies are developed as part of each proposal submission.

Funding under the Elsie Initiative Fund falls into two streams: flexible project and premiums for gender-strong units. In the second funding modality, funds are allocated to a T/PCCs as a premium for a gender-strong unit. Flexible project funding is used to undertake a barrier assessment to the deployment of uniformed women to United Nations peace operations or off-set project costs to remedy some or all of the obstacles identified within a T/PCC’s barrier assessment. Member States contributions support military and police personnel peace operations and/or United Nations organizations in rolling out evidence-based activities, increasing the deployment of qualified uniformed women over the short and long terms. Proposals through this funding stream might include training and mentorship programs for commanders and senior personnel, infrastructure investments, national recruitment campaigns to attract more women into service, and training for women personnel who hope to be deployed.

The second set of funds are allocated to T/PCCs as premiums for gender-strong units. A gender-strong unit is a military contingent or a formed police unit that has a substantial representation of women including in leadership and command positions, and (some in positions of authority), where all unit members have taken in part in gender-equity training, and where adequate equipment or other measures are in place to ensure parity of deployment conditions for all peacekeepers, regardless of gender. 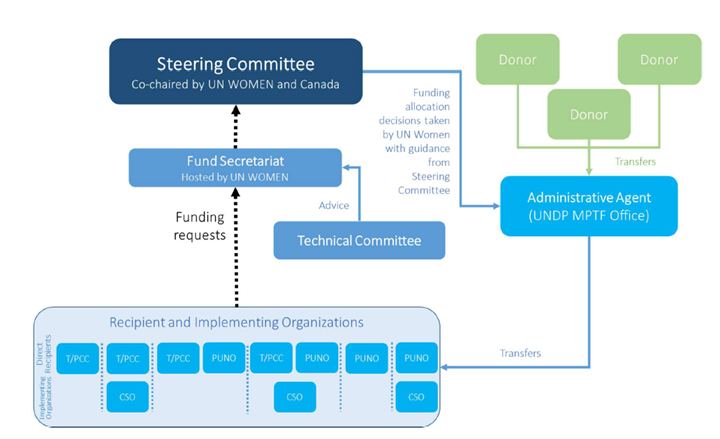 Governs the Fund and provides strategic guidance for achieving programmatic objectives. Comprised of three United Nations members: Executive Office of the Secretary-General (EOSG), Department of Peace Operations (DPO) and UN Women, who also acts as one of the two co-chairs; Canada, as founding member and who also acts as one of the two co-chairs, and is a fund contributor, and three countries: a fund contributor, a T/PCC that is Official Development Assistance (ODA) eligible, and an additional member of the Elsie Initiative Contact Group (link). Member States. The Steering Committee is co-chaired by UN Women and Canada, with final decisions taken by the United Nations Co-chair. The Multi-Partner Trust Fund (MPTF) Office participates as ex-officio member.

Hosted by UN Women, the Secretariat handles the operational functioning of the Fund. It provides technical and administrative support to the Steering Committee and follows up on all aspects of resource allocation and project cycles within the Fund.

Comprising technical specialists, the Committee assists the Secretariat on an ad-hoc basis.

Civil society organizations cannot apply independently—they must undertake activities in partnership with, and through a proposal from, a T/PCC or participating United Nations organization.

Fund stakeholders use a risk management approach to launch interventions that are contextually relevant and focused on addressing the safety and security of all women military and/or police personnel. Proposals must contribute to at least one of the four outcome areas outlined in the Elsie Initiative Fund results framework.

The Elsie Initiative Fund is currently supporting the implementation of 21 ongoing projects in nine countries. The table below shows the recently approved ongoing projects. For operationally and financially closed projects, please switch to the “all project” button below. 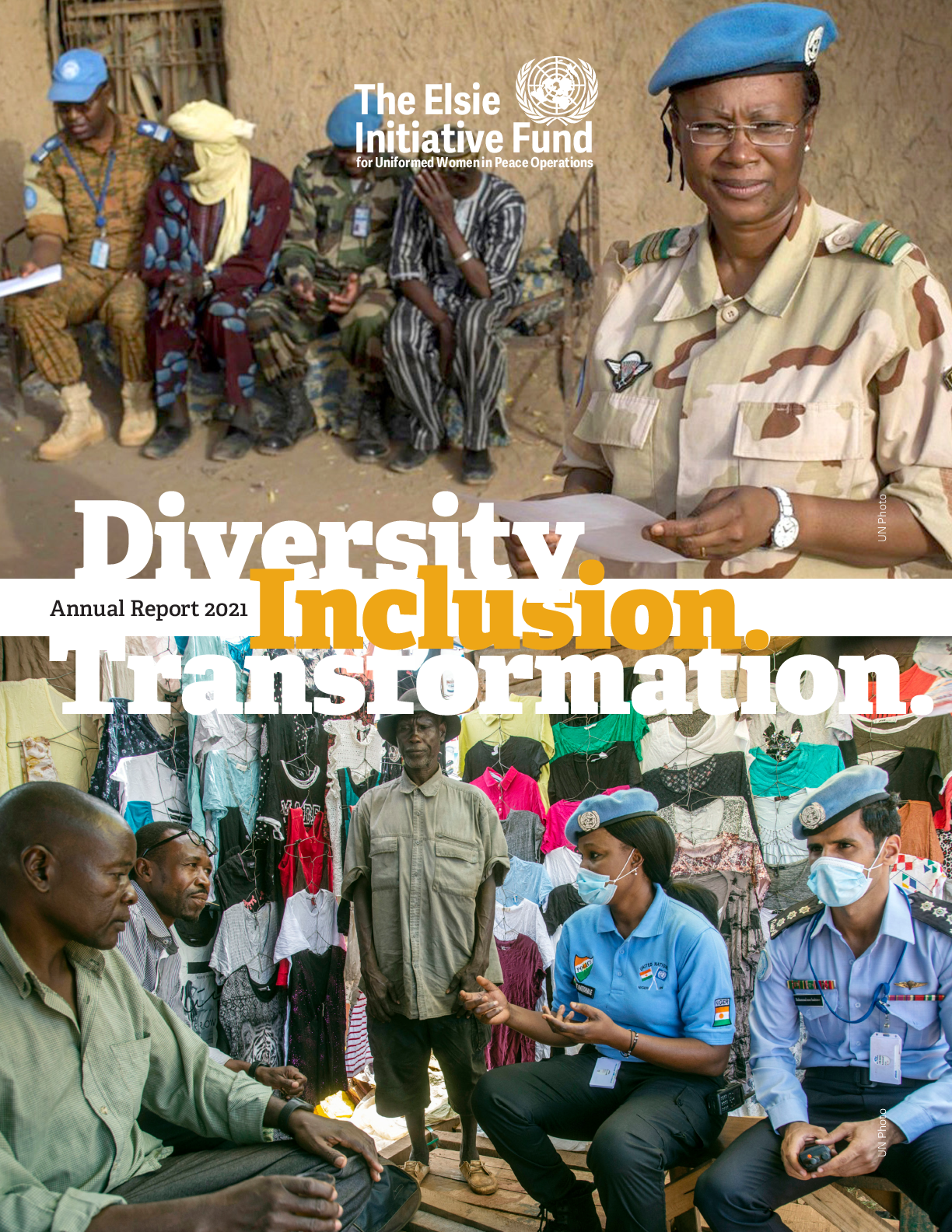 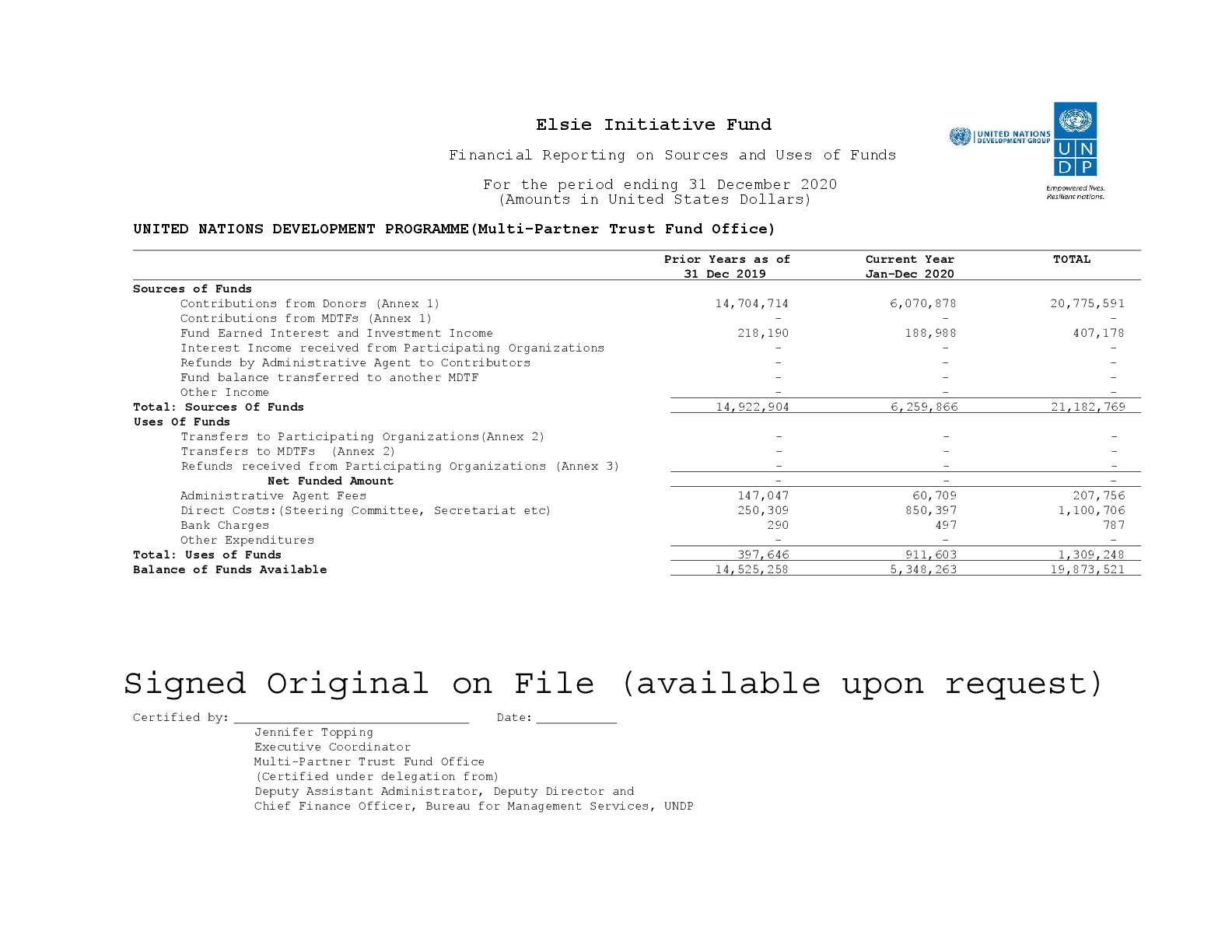 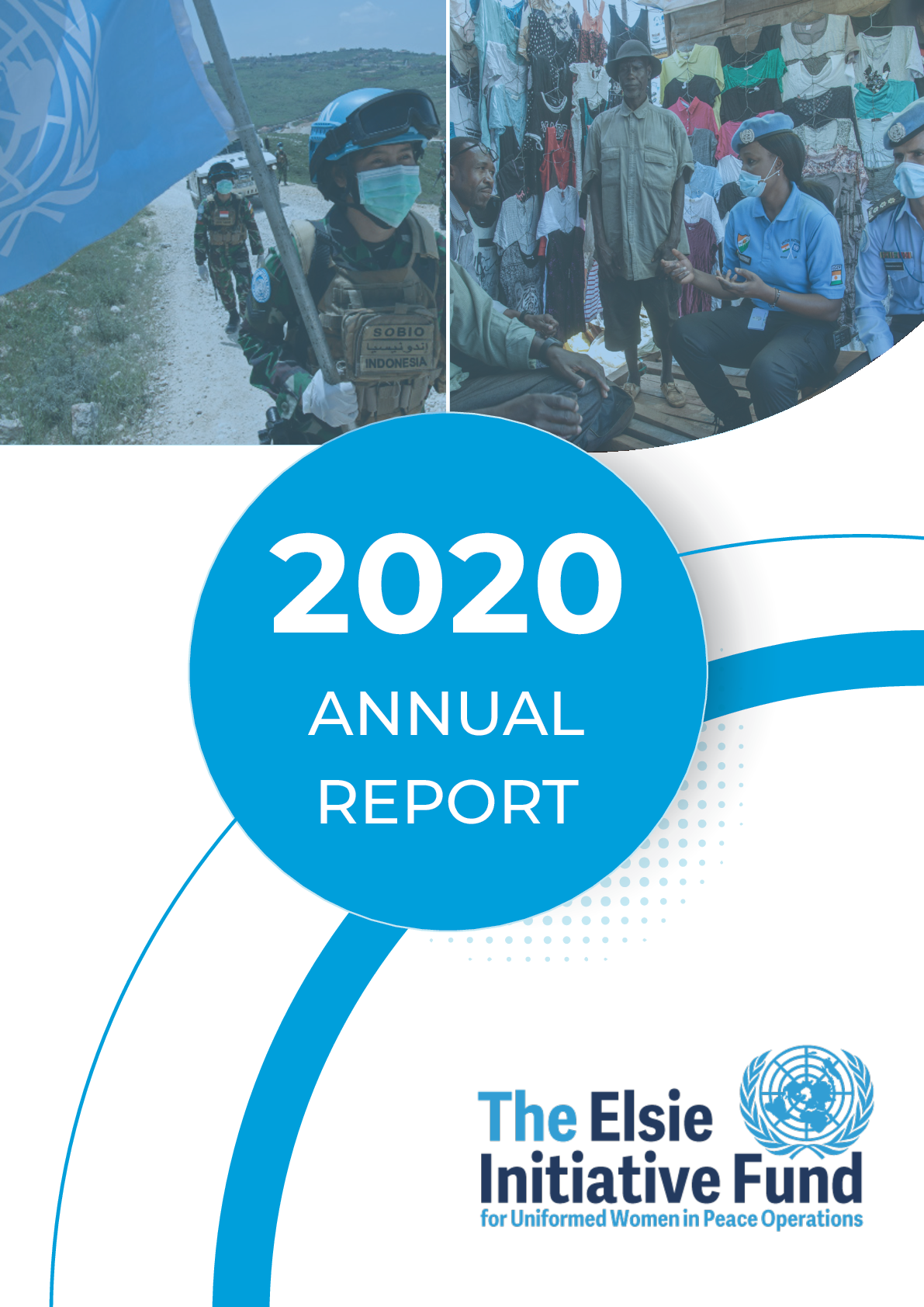 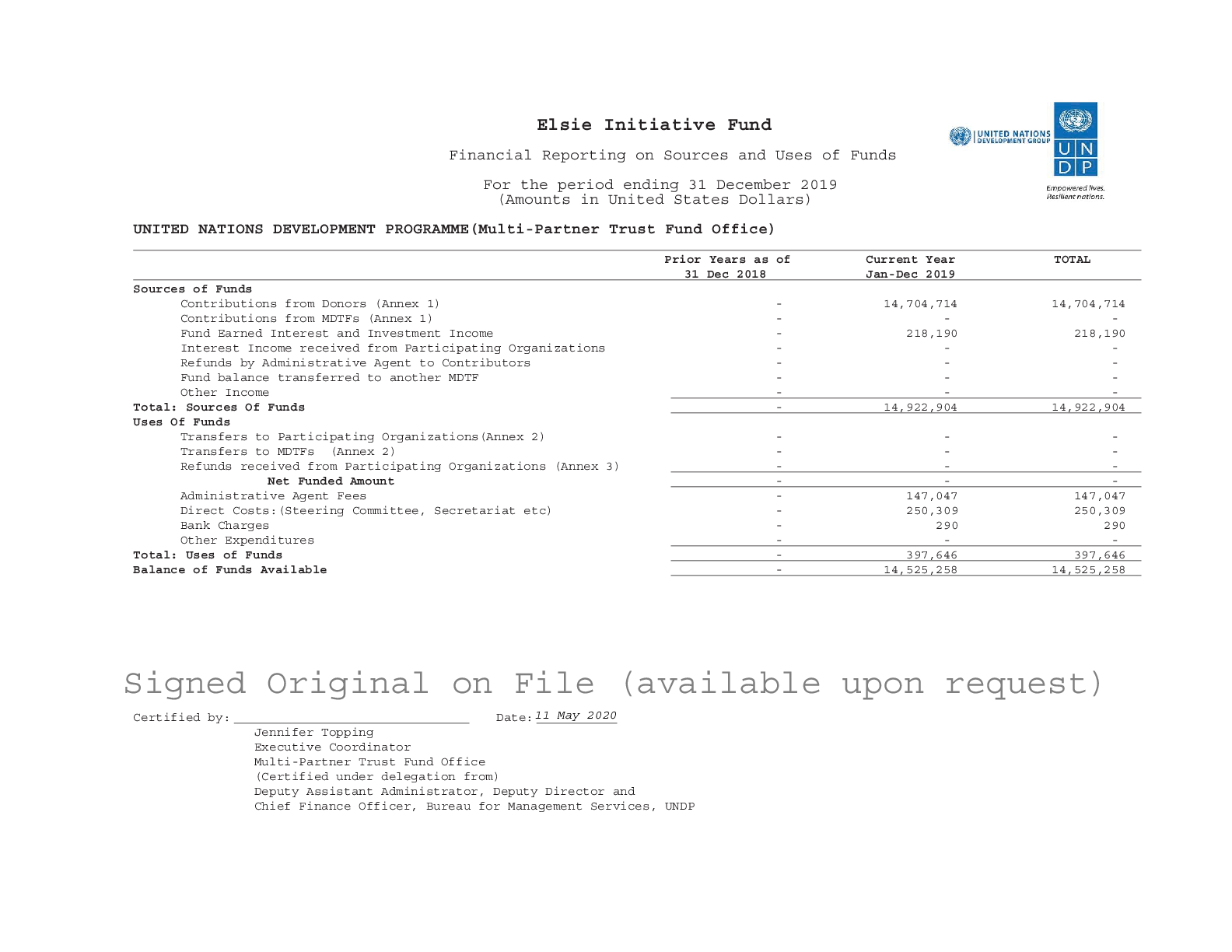 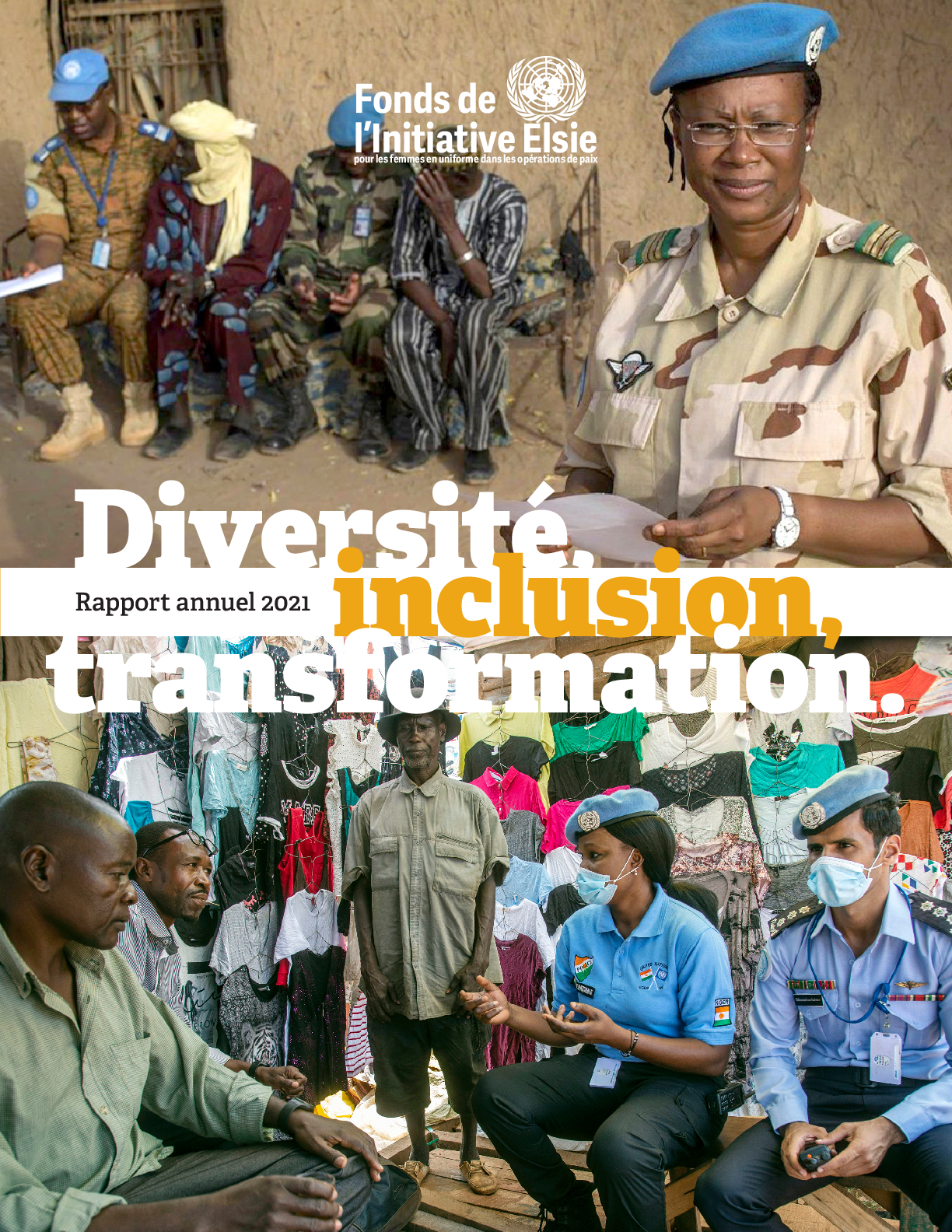